Some early thoughts on an inspiring and engaging event, despite the rather depressing subject matter.

On the 25th June, the European Institute for Gender Equality (http://eige.europa.eu) launched its Index ( GEI) which charts gender equality across the EU. The GEI is a measure of gender equality (or inequality) across a binary sex distinction. The report writers acknowledge the limitations of such an approach, but argue that the quantification of differences of outcomes is important for shaping national and international policy. Importantly, the authors acknowledge that inequality may appear to shrink in certain contexts, because both men and women’s positions have worsened.

These domains are then measured across all the EU states. For those interested in breaking down the statistics, the reports are available online (http://eige.europa.eu/content/publications). Some summary points. The data runs up to 2012 – during the Q&A session the authors stated they had wanted more  up to date data, but it is not in a suitable state for comparison (as yet). The data covers 2005 to 2012 i.e. pre, during and possibly post the financial crisis across Europe.

As the reports are available online, I wont go through all the details here. Rather, I want to reflect on the conference and the key messages which emerged. It was clear that gender equality has not shown any real improvement across the EU in the 7 years the data covers. One of the most stark statistics is the rate of decline of gender equality in the UK. The GEI measures gender equality on a scale of 1 to 100, with the higher the score the better. The GEI reveals that gender equality in the UK was scored at 62/100, in 2012 58/100. This is still higher than the EU averages (51/100 and 53/100 respectively), but is a marked decline. One of the largest declines was evident in the knowledge domain. It’s tempting to link this decline with the actions of the Coalition government and the actions of the current Conservative government need to be closely monitored.

During the Q&A sessions it was argued that the public services are key to gender equality, both in the provision of services and as a site of employment for women. This includes child and elder care support, appropriately targeted health care and education. It was also clear that time use is something in need of further investigation. Women tend to have far less leisure time – something which is largely missing from analyses of work life balance. For those interested in this, I suggest checking the work of Lyn Craig and Abigail Powell which examines time use in the Australian context.

The Q&A sessions were the most engaging. The language used was interesting in itself. While events such as this in the UK are strictly apolitical, with feminism a dirty word, here it was embraced. It was heartening to hear passionate, engaged politicians, lobbyists and academics arguing for a feminist Europe. Speakers were keen to argue that the problem isn’t the under-representation of women, it’s the over-representation of men in decision making roles. The corollary to this is the under-representation of men in care giving roles, both paid and domestic. There were strong debates about achieving change. Professor Calliope Agapiou-Josephides noted, gender inequality is social constructed and can therefore be disrupted. The question is  – how? As one speaker (Xavier Prats Monne) noted, we (gender equality types) always speak to the converted. There are few men, particularly powerful men, who attend these events. The data must reach senior politicians, usually men, such as Finance Ministers and Prime Ministers.

It did strike me that there was nothing new presented today. We know all of this. However, policy makers, politicians, governments etc respond well to numbers. They are difficult to argue against. I hope that the GEI can be used to influence policy across Europe, and that intersectionality will take the project further. Doing so can reveal how gender intersects with other social identities, and the effects can be devastating. 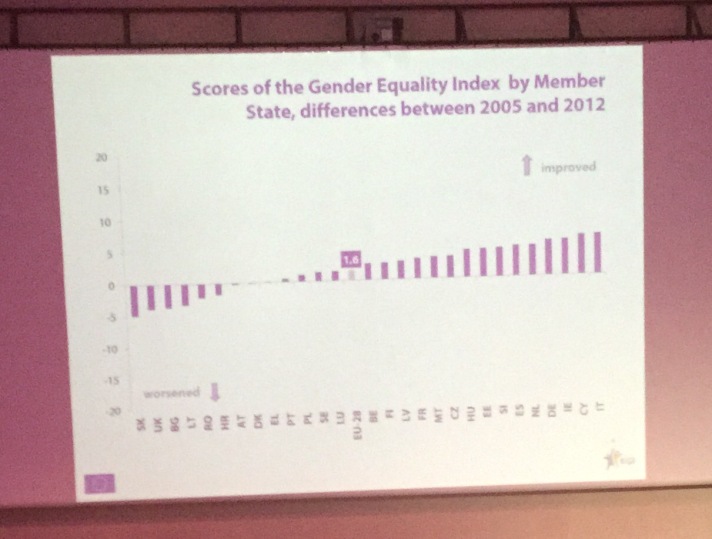 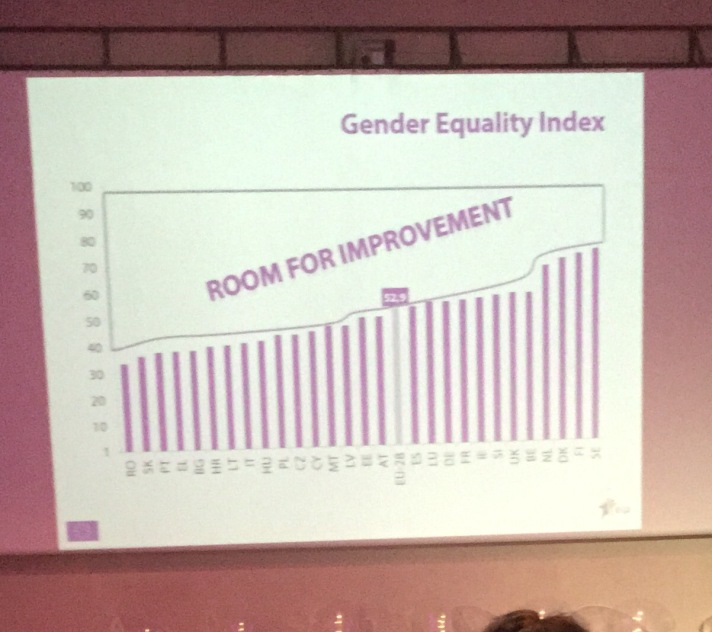 There won’t be many academics in the Twittersphere who are unfamiliar with the parable of Professor Tim Hunt, the Nobel prize winner whose career came to an undignified end after making sexist remarks about women in science. In early June 2015, at a lunch for women in science, Professor Hunt remarked that women in laboratories are problematic because of the tears and sex (to summarise). These statements (google if you want to see them) were picked up by various media and there was a resulting social and mainstream media stink. With some speed Hunt was asked to resign by University College London where he was an Emeritus professor. He also resigned from positions with the Royal Society and the European Research Council.

Predictably this has triggered a number of opinion pieces and twitter hashtags (#distractinglysexy for example). Many have argued that these resignations were just, while other including Professor Brian Cox and Professor Richard Dawkins (and Boris Johnson) feel aggrieved on behalf of Tim Hunt. I’ve been muddling through what my thoughts are and why I feel some discomfort over the resulting focus on this one person. There are two main concerns I have; the well-being of Tim Hunt and what these ‘resignations’ means for the organisations.

Firstly, Tim Hunt’s well-being. Whenever these kinds of social media storms occur I worry for those at their ‘eye’. As Tim Hunt’s positions were honourary, I don’t know what, if any, employment protection he would have had. He may well not be protected by a disciplinary process where his employer would have a duty of care towards him. I know nothing of his personal circumstances, but I hope he is being well cared for. His comments were sexist and there should be consequences. However, there are human beings at the centre of this story and that should never be forgotten.

More broadly, I find myself wondering whether the resignations were appropriate. Hunt’s comments were unusual in that they were said in a public forum. I’ve seen very similar ‘jokes’ made, and so far I’m not aware that any of those men have faced penalties. Sometime ago I attended a conference where one of the opening speakers commented that he had felt honoured to be invited to attend an international conference – but then he saw how many women there were in the audience and realised it wasn’t prestigious after all. So, it strikes me that Tim Hunt has faced these penalties because he said out loud what others mutter in private.

This leads me to the idea that Hunt is a ‘sacrificial lamb’ of some kind. Even before the nauseating pieces by Boris Johnson and the gang, I predicted that Hunt would be positioned by some as a martyr to feminism. However, I think he’s the opposite. Organisations such as UCL can demonstrate their intolerance of sexism by calling for the resignation of someone in a high profile position. Wow, how impressive. They must really dislike sexism! However, to what extent are all of these organisations tackling the day to day, insidious, grinding sexism which women face? The kind which is far politer, whispered and culturally embedded. When an organisation effectively sacks a high profile person, for sexist or racist language, do they then absolve themselves of responsibility to look inwards. To tackle the more difficult cultural change, rather than engage in a high profile act which provides an image inclusivity.

I would have preferred an investigation of some kind – given Hunt’s comments we have to wonder how women who have worked in his labs have fared. He should have been given the chance to explain, to learn and perhaps to use his position in a more positive way. Instead we have the current unedifying position, while the organisations he was connected to can sit back comfortably, having shown how committed they are to women’s careers. On a final note, I’ve seen some on Twitter suggest that Hunt may be on the Autism Spectrum and his ‘jokes’ are evidence of that. I’ve no idea whether the former is the case, but linking ASDs with sexist behaviour is a dangerous path to walk, and one we should steer clear of.

Update: it seems Tim Hunt has some form in this area – although this interview suggests confusion rather than malice http://www.labtimes.org/i50/i_01.lasso

Further update (this is going to drag on for a while): Tim Hunt thanks women for their support and discusses his support for women scientists http://www.theguardian.com/world/2015/jun/20/sir-tim-hunt-gratitude-female-scientists-support-joke?CMP=share_btn_tw